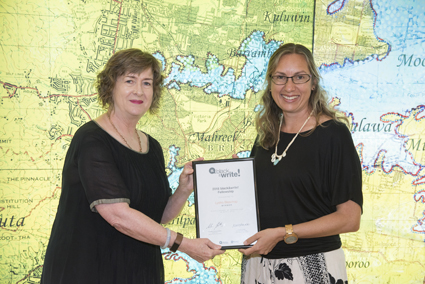 The 2018 black&write! Fellowship recipients were announced at a special ceremony at SLQ on Thursday 26 April. Presented by Vicki McDonald, State Librarian and CEO.

Following is an extract from the speech.

“The Upwelling is a young adult fiction manuscript that tells the story of Kirra, a teenage surfer who catches a wave and time slips into a land without European influence, only to discover her unwanted magical gift is the only thing that can save the world.

A fit and active mother of two, Lystra was struck down by serious illness in her early thirties, leaving her bed-ridden for three years while enduring a series of major operations. Recovery inspired Lystra to join her husband and children in their love of surfing, a pursuit which unlocked her creativity and sowed the seeds for Kirra’s story.

The judges praised The Upwelling as a highly original coming-of-age story, unlike anything they had ever read.”